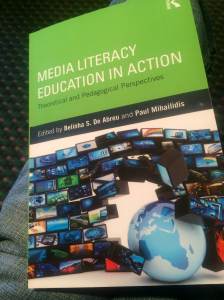 ACME had the good fortune to participate in the seminal Fairfield University Media Literacy Research Symposium this month, organized by Fairfield University’s Belinha S. De Abreu and Emerson College’s Paul Mihailidis. Delivering the lunchtime keynote, veteran cyberpunk writer, media futurist, and Frontline PBS poster boy Douglas Rushkoff (quick aside: if you haven’t seen Merchants of Cool, The Persuaders, Digital Nation, and his new film Generation Like, download them into your brain immediately) noted that “today feels like an important moment in the history of the media education movement.” He then launched into a hilarious and at times scathing critique of the algorithmic forces (think Google’s relentless digital efforts at world domination through info manipulation or Facebook’s insidious data collecting in the name of “friend”ship) undermining the Team Human experience. No longer is the most important media education question the What (content) or the How (coding), Rushkoff concluded, but the Why; see Generation Like for more.

Among other remarkable moments in this fantastic day, which brought together 90 international media educators from diverse backgrounds in education, public health, production, and organization (both NAMLE and ACME members were present, as were MLE veterans from as far away as Ontario and London), was the “drop” of De Abreu and Mihailidis’s new book, Media Literacy in Education, a seven-part paperback featuring 26 essays sure to reinvigorate conversation about directions for the international media education effort for years to come.

Don’t let the slim paperback or the happy global cover image fool you: This new collection, published by Routledge, means business. De Abreu and Mihailidis bring readers some of the most compelling veteran voices from the MLE field—the Davids (Considine and Buckingham), Art Silverblatt, Frank Gallagher, and Neil Andersen—but also a wide variety of new and up-and-coming voices, including more POV from women and international researchers (hooray!) and writers from Australia, Hong Kong, Lebanon, Canada, England, and the United States. While I cannot do the richness of this new collection much justice in a short review, here are a few highlights:

• LAMP’s Katherine Fry reminder that “teaching is a subversive activity”;

• Lori Bindig and Jim Castonguay’s look at ways in which media literacy scholars, educators, and activists can find common ground;

• Art Silverblatt, Yupa Saisanan Na Ayudhya, and Kit Jenkins’s call for an international framework for informational literacy (connecting to this, I must channel my ACME colleague Julie Frechette’s continued call for multiple literacies as a way forward in 21st-century media education);

• Jad Melki’s inspired work from Lebanon and the Arab world in building “a locally grown and sustainable curriculum”; and

• Nick Pernisco’s championing of media literacy education as a way to help “shrink the divide” and solve social inequalities.

These five examples are but sips from a deep well of wisdom from MLE practitioners around the world. If you are a teacher, administrator, parent, or citizen looking for inspired ideas for curriculum or community-building through media literacy education, then this new book is a must-read. In his opening chapter, English ML educator Julian McDougall (who attended the Fairfield conference) referred to media literacy education as an “unfinished project”—as it should be—and this new book is testament to the ever-evolving and diverse international project that media literacy has become. Read it closely, and learn much.