While the ACME board was in Toronto for a conference and board retreat, several members went to see the celebrated indie film Ex Machina. Following are reviews by Treasurer Sara Voorhees, our resident professional movie critic, and Co-President Rob Williams. Have any of you seen it? Let us know your thoughts…

SURROGATES AND REVELATIONS
by Sara Voorhees
​
Her name is Ava. She is delicate and soft-spoken and as graceful as a dancer. Her face is flawlessly beautiful, and she is charming and flirtatious. But Ava is not human. She is the latest in a line of artificial-intelligence prototypes created by a reclusive ubergenius.

Her movie Ex Machina, conceived by first-time director (and well-regarded screenwriter) Alex Garland, is smart and cagey, and full of provocative twists and potholes that left me dazed by its brilliance, and also feeling a little bit as if I’d been dragged out of an elevator by my hair, which is exactly why we go movies like Ex Machina. The possibility of artificial intelligence, of humans attempting to give life and sentience to a new being, has been titillating science fiction fans for centuries: the 19th century had its Dr. Frankenstein, followed at the beginning of the 20th century by Dr. Moreau and his efforts to create humans out of animals. Now, as 21st-century computer technology narrows the gap between fiction and reality, along comes Alex Garland to titillate us some more.

Ex Machina opens with a lowly software specialist named Caleb (Domhnill Gleeson, the soulful Irish actor from ABout Time), who has been given the honor of a weeklong visit with his employer, Nathan. Nathan is the CEO of the largest search engine company in the world. Caleb is flown over miles of verdant wilderness to Nathan’s remote “research facility”—a sleek but soulless structure that seems to have oozed from the rocky outcropping of the Norwegian mountainside and is accessible only by helicopter.

Our first glimpse of Nathan is in our mind’s eye: the angry sound of pounding a boxing bag leads us to him, dressed in sweats and unwrapping the protective tape from his fists. He’s played by Oscar Isaac, furry-faced and fresh from last year’s A Most Violent Year. His welcome of Caleb is so aggressively arrogant, you don’t know whether Caleb should kneel before him or run for his life.

Caleb is the audience’s surrogate: he has no idea why he has been chosen for this meeting, and neither do we. But Gleeson is an actor whose feelings are transparent: fear, awe, lust, horror, hunger—everything registers immediately on his innocent face, so that even before Nathan explains why he’s been brought to this reclusive hideaway, we are armed for danger.

It turns out that Caleb’s job is simply to interact with Nathan’s most recent AI design: Ava. His role is to perform the Turing Test (see last year’s Academy Award nominee The Imitation Game) to determine if Ava can pass for human. How does she make Caleb feel? Is she sentient, or is she just a machine?

Nathan stages a series of daily conversations between Ava and Caleb, in which Ava is on one side of a glass wall and Caleb is on the other, as if he were visiting her in prison. Or a zoo.

When we first meet her on the other side of the glass, she has the appearance of a doll who’s been lovingly mangled: her hands and face have the appearance of human flesh, but the rest of her is either covered by an intricate silver mesh or left transparent so the circuitry in her limbs and torso are visible. Ava is obviously and magnificently artificial, but her movements, conversation, and reasoning are eerily human. She is also voluptuous—of breast and of buttock. She is, as the boys in 7th grade used to say, built.

Ava is played by the delicate and childlike Swedish actress Alicia Vikander, and as her conversations with Caleb progresses, she becomes increasingly aware of her self, and unexpectedly seductive. Meanwhile Garland peppers the story with enigmas: scars on Caleb’s back; a stunningly beautiful Asian woman who is mute; tantalizing discussions between Caleb and Nathan about Ava’s sexuality and the power of Artificial Intelligence .

It’s worth mentioning that the names of these characters are significant—especially if you’re conversant in Hebrew. (I am not, but my copy of What Shall We Name the Baby? is.) Caleb, for instance, means “faithful” or “dog,” both of which are good descriptions of Gleeson’s character. Nathan means, appropriately, “a gift from God.” And Ava (whose original name Eve was rejected, according to Garland, because that name is a cultural cliché for “First Woman”) is the short form of Chava, the Hebrew name for Eve, “the living one.”

Ava is both: the first of her kind and the living one.

Ex Machina is a bold movie, at times deeply misogynistic and at others, triumphantly feminist. It will no doubt be experienced more viscerally by women and more intellectually by men. At Ava’s final moment of revelation, I noticed the men around me in the theater were still breathing. The women were temporarily paralyzed by a horrified gasp.

Director Alex Garland’s directorial debut, Ex Machina, is at once a riveting Hitchcockian meditation on the human/machine relationship and a misogynistic tale of men and the women they dismember. Garland begins his story by introducing the audience to Caleb (Domhnall Gleeson), a computer programmer who finds himself selected by Nathan (Oscar Isaac), his company CEO, to assess the AI (artificial intelligence) worth of humanoid “Ava” (Alicia Vikander). Garland sets these Caleb/Ava sessions deep in the beautiful but remote helicopter-accessible-only Norwegian wilderness, where Nathan’s lab/HQ—sparse, secure, and oddly sinister—serves as a claustrophobic contrast to the sublime Scandinavian backdrop—all lush forest, craggy cliffs, and magnificent waterfalls.

Garland proves skillful at quickly building his story’s suspense through plenty of tight shots, much misdirection, hidden cues, and lots of quirky 20th-century pop-culture references. Questions soon emerge: What does Nathan really want of Caleb? (“Don’t trust Nathan,” Ava cautions when the power unexpectedly [?] cuts out during one of their many “sessions.”) Is AI Ava really emotionally attracted to Caleb, or is she just built and programmed that way? (Turns out Oscar may have designed her by riffing off of Caleb’s porn profile, easily extracted through corporate web data mining). And what is up with Nathan’s mute Japanese servant, or the several mutilated robotically naked exo-sins stored in Nathan’s classified closets?

Garland casts his film well, with Gleeson playing the audience’s surrogate stand-in with the right mix of open-eyed skepticism and genuine curiosity, Isaac as the brilliantly eccentric if slightly mad Dr. “Dude” Moreau character, and Vikander bringing both her ballerina training and acting chops to Ava’s role, exhibiting a believable balance of cyborg/human characteristics. But, as my female friends have pointed out, creating Ava as a guileless sexbot teenager distracts from Garland’s deeper questions about AI/human relations, questions that might be more provocative if Ava and Caleb did more than simply flirt with one another. Worse, perhaps, is Isaac’s mad scientist fetish for fabricating AI women to satisfy him: The latent misogyny and spooky behavior he implicitly exhibits as he turns sexual satisfaction into physical violence against his fembots in Ex Machina hits you in the face.

While Garland’s haunting film is mesmerizing as a mystery/horror story, then, it falls down in its effort to raise larger questions about how artificial intelligence, once unleashed, can be hard to put back in the bottle. “We have become Death, the shatterer of worlds,” muses Caleb to Nathan early on, paraphrasing A-bomb co-inventor Robert Oppenheimer’s famous channeling of a line from the Bhagavad Gita.

Maybe, and if so, how sad that AI in Garland’s story simply reifies the same old tired gendered stereotypes. Director Spike Jonze did AI better last year in Her, and his brilliant decision to cast Scarlett Johannson as a disembodied AI voice who falls in love pushed audiences to think (and feel) the possibilities and perils of the AI/human relationship much more deeply and intimately than Garland does here, despite the darkly entertaining ride Ex Machina provides along the way. 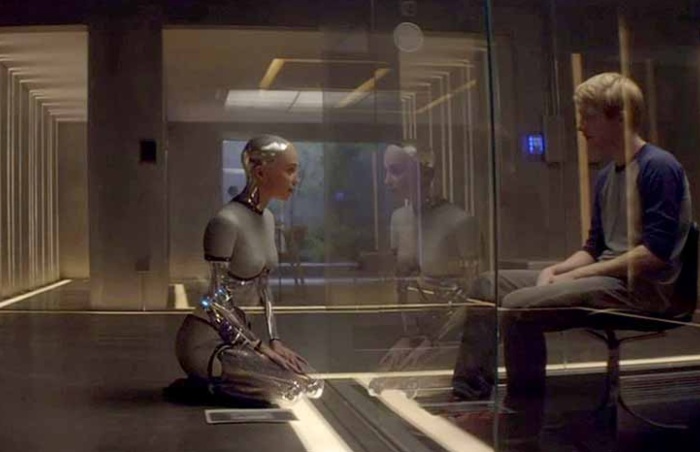