The state government of Vendée, France, has invited Edupax, long-time partner of ACME, to come to its schools and try to convince adolescents to cut recreational screen-time exposure drastically. Beginning in March and continuing through May, Jacques Brodeur will organize and lead events in twelve high schools that have agreed to join in this educational adventure.

This exercise of disconnection for a 10-day period will allow students to evaluate their own level of addiction, to take note of changes in their lives, and to express their perceptions of the experience. Such a disconnection is possible only with two conditions: training and cooperation. Well over 3,500 adolescents will try to replace screen-time with other activities, chosen by themselves, created by themselves, or proposed by community organizations coming to support their efforts.

The launching of Défi sans Écrans (the 10-Day Screen-Free Challenge) with students requires professional development preparation with teachers and other staff members: How will they motivate students? How will they get parents to participate? How will they educate students in the specifics of media uses and issues? How will results be evaluated?

Adolescents’ attraction to new communication-information technologies might seem harmless. But negative consequences have become obvious. China, Japan, and South Korea have organized Internet detox camps. In North America and Europe, digital clinics have opened their doors. Studies on the various effects of increased screen time have gone almost unnoticed. According to an international study on Health Behaviour in School-aged Children reported in 2016, adolescents in France now spend 7 hours, 48 minutes per day on screens. During previous years, public health services have observed unprecedented rates of obesity rates, attention deficit, troubled behavior, eating disorders, and sleeping disorders. During the same period of time, school performances went down, dropout rates went up, and impulsivity of kids increased. Doctors now treat huge numbers of adolescents for nomophobia and FOMO (fear of missing out). Young adults become anxious when obliged to sleep without their phone. And what about defamation on social networks ? 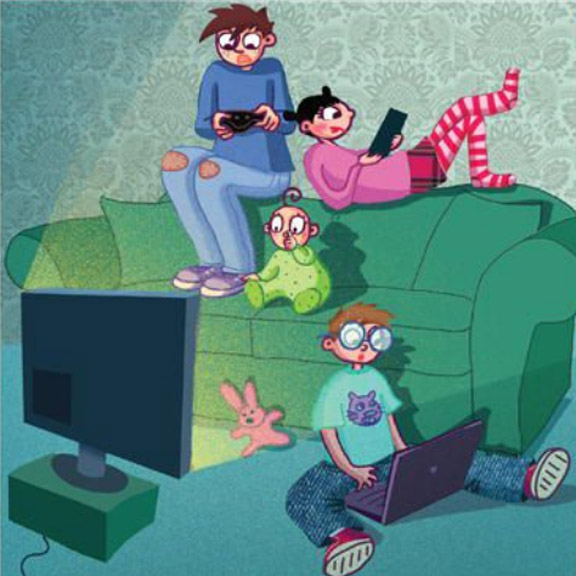 The 10 Day Screen-Free Challenge, created in Québec back in 2003, has spread across France since 2008. Thousands of children and teens attending more than 260 schools have experienced the challenge. Appreciation among parents and teachers has kept the movement for screen-freedom traveling from one school to another. Of course, nothing is easy with this Challenge, in which young people face  off against professional marketers and entertainers paid to keep kids and teens sitting and watching. The Challenge has been shown to be possible and positive in all communities where parents and teachers agree to organize for the health and educational accomplishment of their children.

Reminding us of the galaxies of Gutenberg and Marconi, as mentioned by Marshall McLuhan back in 1962, the time has come to explore the digital galaxy of Freedom-Truth-Solidarity.